All Events
Vagabond Players Presents Charley's Aunt
8:00 pm
The Bernie Legge Theatre, Queen's Park
Charley’s rich Aunt, Donna Lucia, is visiting from Brazil and the timing couldn’t be better. Her presence as a chaperone will allow Charley and his friend Jack to ask their respective true loves, Amy and Kitty, for their hands in marriage. But time is ticking, so where is Charley’s Aunt? On learning she will be delayed by several days, they blackmail their eccentric friend, Lord Fancourt “Babbs” Babberley, to save their romantic plans and pose as Donna Lucia. The comedy deepens when Jack's newly impoverished father arrives along with the girls' greedy guardian and suddenly "Babbs" is the most popular widow in town… And then Charley’s real aunt arrives!

This classic comedy ran for 1,466 performances when it opened in 1892 and it has been delighting audiences ever since! 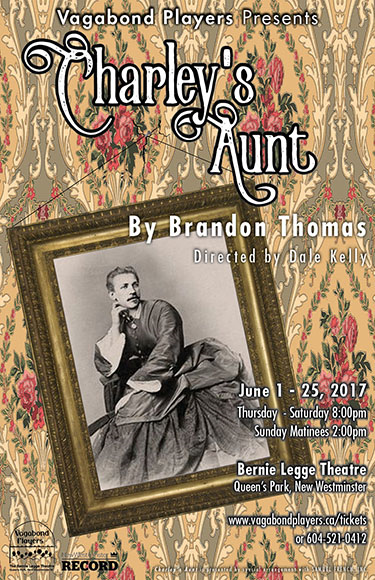