Last July, a Canadian Icon fell victim to a vicious storm in Toronto. On July 19th, 2013 The Maple Leaf Forever Tree crashed to the ground, ending a legacy that began in 1867 when a Scottish immigrant named Alexander Muir, a teacher and principal, was inspired to write a song by a maple leaf falling on his shoulder from a tree in front of his home on memory lane.

The song, Maple Leaf Forever, was written to commemorate Canada becoming a nation. In the decades that followed, it became our unofficial national anthem. It was due to the nationwide popularity of this song that the maple leaf became entrenched as our national symbol.

Through the grace of the people of the Toronto, the Society of the Honourable Guard, a ceremonial guard, based in New Westminster, has been given a limb from this Icon. We will take delivery of it, in a ceremony on Saturday May 17th at Westminster Pier Park at 1:30 PM. The delivery vehicle will be under escort by the 3rd Cav, Canadian Army Veterans Motorcycle Unit. There, it will be met by dignitaries and the people of New Westminster.

The Society of the Honourable Guard is commissioning a ceremonial Drum Majors Mace that will be constructed of this wood. Mr. Ed Pretty, from the Greater Vancouver Wood Turners Guild has graciously offered his services in turning the mace shaft, and through the Generosity of Teck Resources, the Silver used in the construction of this mace will be British Columbia Silver.

When completed, this mace will be one of the projects utilizing this wood, which include; a desk for the Speaker of the House of Commons. A flag standard for Parliament, and gavels for Toronto City Hall.

It is also the intention of the Honourable Guard to provide pieces of this National symbol to BC Schools, in teaching our youth where the symbol of the maple leaf originated. 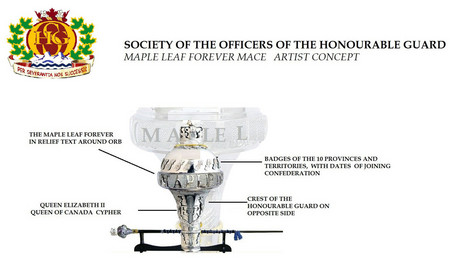