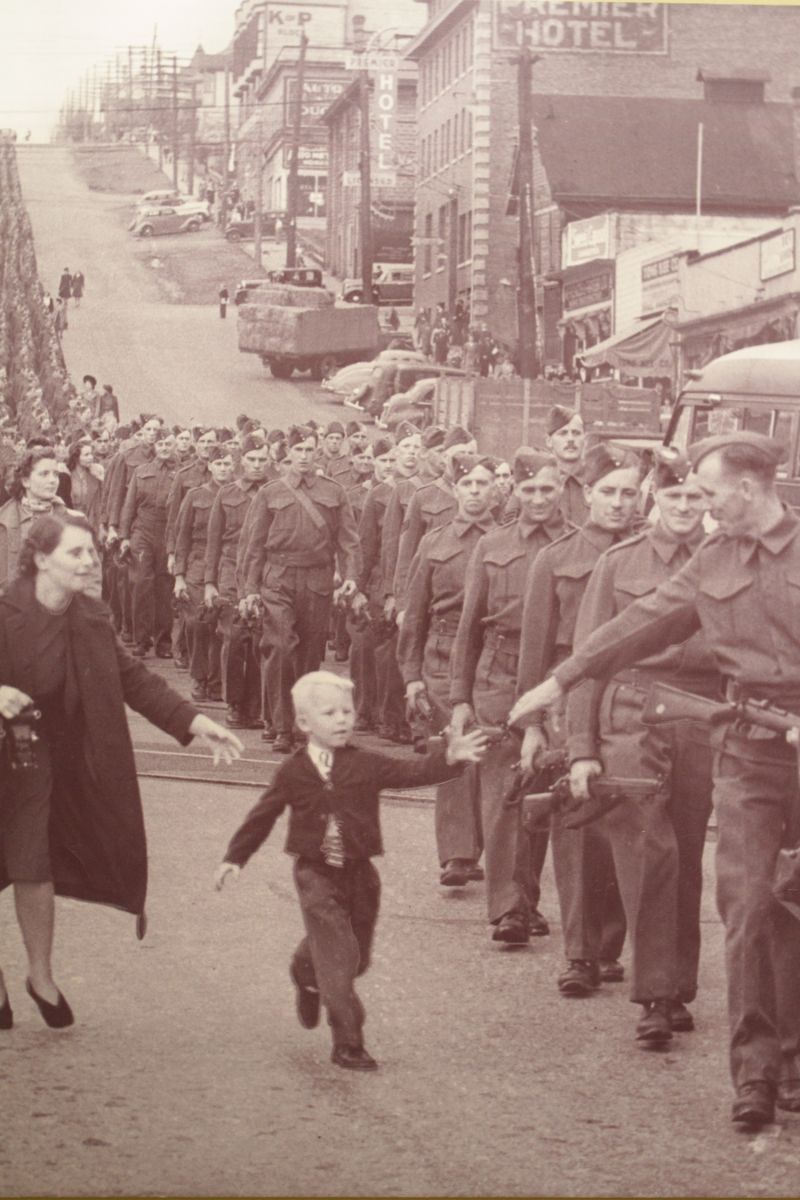 New Westminster, BC – The City of New Westminster is pleased to announce the selection of the artist teamwho have been commissioned to create the “Wait For Me, Daddy” war memorial public artwork in downtown New Westminster.

Veronica and Edwin Dam de Nogales are internationally renowned artists who have been creating public sculpture exclusively together for the last 16 years. They have produced 28 public sculptures commissioned in Canada, the US and Europe including the prestigious Canadian Voice of the Land monument in Queen’s Park, Toronto.

The “Wait For Me, Daddy” project was inspired by the historic and iconic photograph taken by Claude Dettloff on October 1, 1940 in New Westminster at Columbia and 8th Streets. The image of a child breaking free of his mother’s hold to reach out to his father marching off to war became one of the enduring images of WWII. The photograph was featured in Life magazine among other notable publications, and is the second-most requested photograph in the National Archives. In 2011, a Mayor’s Task Force was established to develop a public art piece to commemorate this historic photograph.

“The “Wait For Me, Daddy” photograph holds not only tremendous historical significance to New Westminster, but also to the rest of Canada, as it depicts the emotional connection between father and son and the struggle that ensues when leaving to do one’s duty in the armed forces,” said Mayor Wayne Wright. “We are extremely proud that this important photograph will be immortalized in our city.”

In July 2012, a call for artists was issued seeking submissions for the creation of three bronze life-sized sculptures depicting the “Wait For Me, Daddy” photograph which will be installed in situ, on or near the place where the photo was taken. Fifteen submissions were received and, in early 2013, five artists were shortlisted by a public art jury of six community members.

“Edwin and Veronica Dam de Nogales’ proposal really stood out because of its innovative design and its use of elements mirrored in the new Anvil Centre and Westminster Pier Park,” said Councillor Lorrie Williams. “We are delighted to be partnering with this world-renowned artist team on what will surely become an iconic landmark for the City of New Westminster.”

“We were not only intrigued with the subject matter, and the powerful image captured in photographic form by Detloff, but also with the particular space,” said Veronica and Edwin Dam de Nogales, “Hyack Square seems to be a crossroads of sorts.  It stands with one foot in the past and one foot lunging into the future. This presents itself as an opportunity to create a powerful work which not only allows people to look back and remember, but also to look forward with hope.”

The artwork installation, which will be unveiled to the public in October 2014 in Hyack Square, is expected to stimulate dialogue and draw positive attention from visitors, residents and media. In addition to the public art piece, Canada Post will also issue a “Wait For Me, Daddy” commemorative stamp in 2014, a National Historic Site designation will be sought, and a celebration parade is being considered in 2015 to commemorate the end of WWII.