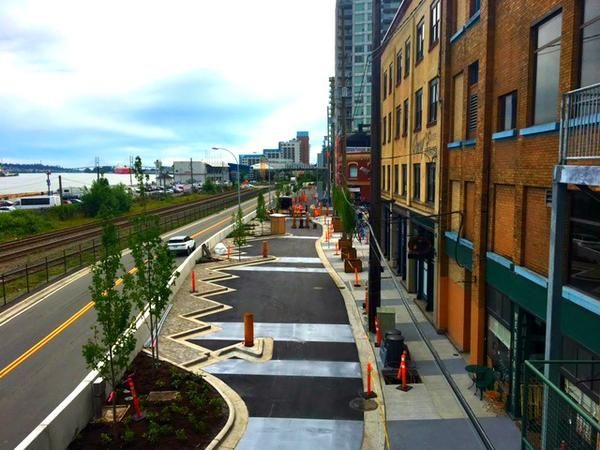 New Westminster’s Riverfront has historically been considered our greatest asset. For generations, the City’s economy depended on its location along the Fraser River as local industry grew and thrived. While industry continues to generate jobs and economic development, the Riverfront has been undergoing a major transition over the past decade. In the process, the City is working to leverage this asset to establish New Westminster as a premier Riverfront destination where residents and visitors alike can experience retail and recreation activity while contributing to the local economy.

As New Westminster’s changing Riverfront continues to take shape, pivotal to achieving greater connectivity between the downtown and the Fraser River are the Front Street Parkade and Front Street Mews projects. To ensure the parking needs of downtown businesses are met, a significant portion of the parkade from Sixth to Fourth Streets has been rehabilitated while the section between Sixth and Begbie streets has been removed. The end result reestablishes Front Street as a vibrant, animated commercial corridor complimented by the Front Street Mews, a newly constructed streetscape which includes additional street level parking and public realm elements that encourages foot traffic to the area.

Project is substantially complete, including parkade rehabilitation and deconstruction, public art installation and Mews construction, with the Mews hosting the Fridays on Front event throughout the summer. In 2018, additional beautification will be undertaken near McKenzie and Front Streets.