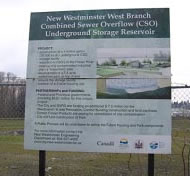 When rainstorms hit New Westminster, the combined sewers (sanitary and storm) in the city often do not have the capacity to carry all the wastewater from homes to the region’s treatment plants. As a result, sewage from the combined sewer overflows (CSO) unavoidably enters receiving watercourses – namely the Fraser or Brunette Rivers.

The City of New Westminster has been replacing its combined sewers – an older type of collection system – with separate pipe systems (wastewater and stormwater). This process is a costly, long-range project that results in a replacement rate of only 1% annually.

In 2005, the City partnered with Metro Vancouver (GVRD) in an initiative to create a tank (CSO tank) that would receive combined sewer overflows from the west end side of the City. The tank, which is a 20,000 cubic meter volume storage facility, was designed to address the CSO problem in that area by collecting large quantities of wastewater (e.g. during large rainfall events) and storing it until a time when the treatment plants can handle the additional load. This CSO tank aims to reduce combined sewer overflows in the City by 30%!

Did you know?
CSO Building wins "green" award! Visit the Metro Vancouver website to watch a video on the construction of a CSO tank (Episode 21).