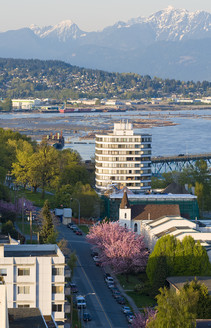 Symbolism of the Coat of Arms of New Westminster
The coat of arms and flag presented by the Governor General are a unique expression of the City's natural and historic heritage.

The City flag is modelled on the national flag, with blue bars at either side and the shield of the City’s arm in the Centre. The Shield is based on the emblem drawn by Corporate White of the Royal Engineers and adopted by City Council in 1860, the year of incorporation. It contains symbols evoking the situation and economy of the young settlement in colonial British Columbia: transport by sailing ship, the agriculture of the lower Fraser valley, the natural heritage and wealth of the great coastal forests, the salmon riches of the Fraser River.

On April 6, 2009, Brad Jalbert of Select Roses presented the City of New Westminster with its own unique variety of rose to commemorate the Royal City’s 150th anniversary. Officially named the “Royal City Rose”, the hybrid flower was the culmination of six years of testing for winter hardiness, disease resistance and freedom of bloom. The apricot-hued, lightly perfumed “Royal City Rose” has been registered with the International Cultivar Registration Authority and the American Rose Society.