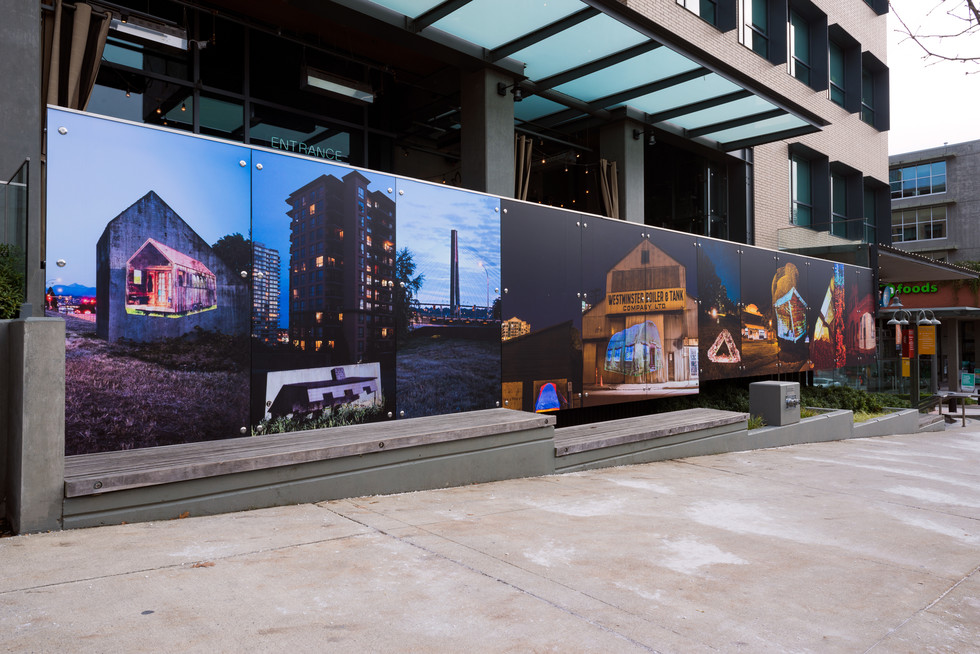 Using portable video projectors, the artist, Annie Briard has projected images of temporary homes sourced through social media calls around New Westminster, which she then photographed. Process-based, the final form of this work is determined by the artist’s encounters with space, and the new meanings constructed through chance juxtaposition. The work seeks to engage with discussions about our relationship to our environment, land ownership, and varied conceptions of shelter.

Pop-Up Home is a public art project created by artist Annie Briard, commissioned by the New Westminster Museum & Archives and New Westminster Arts Services working in partnership with Wesgroup for the Canada 150 commemoration. This project was been made possible in part by the Government of Canada.

The artwork was installed at 290 East Columbia Street, New Westminster.

Annie Briard is a Canadian artist whose work challenges how we make sense of the world through visual perception. Creating lens-focused work and expanded photography, she explores the intersections between perception paradigms in psychology, neuroscience and existentialism.

Her moving images, photography and media installations have been presented in several solo exhibitions in Canada, including "Paracosmic Sun" at Back Gallery Project (Vancouver, 2017), "Vision Trouble" at La Maison (Winnipeg, 2016), "Sight Shifting" at Joyce Yahouda Gallery (Montreal, 2014), as well as group shows, festivals and fairs internationally, including at the Vancouver Art Gallery, Art Mur (Montreal), Three Shadows Photography Centre (Beijing), the Lincoln Film Centre New York, Matadero Madrid, the Switzerland Architecture Museum, among many others. Recently, she presented large-scale public art projects for a number of commissions including a monumental projection-mapped video (Facade Fest, Vancouver), a billboard (Capture Photography Festival), photographic murals, and in the past, video sculptures (Art Souterrain, Montreal) and interactive animations. Sourcing inspiration from the affectation of new and/or altered sights, she regularly undertakes art residencies, including in the Maritimes, New York, Spain; soon in Los Angeles and Iceland; while also creating during long-haul hikes across the North American back country. Her work has been awarded grants from the Canada Council for the Arts, the British Columbia Arts Council and the Social Science and Humanities Research Council.

Briard holds a BFA from Concordia University and an MFA from Emily Carr University of Art + Design, where she is an Adjunct Instructor for the Faculty of Art. In conjunction with her practice, she occasionally curates exhibitions and public programs in relation to her research interests.