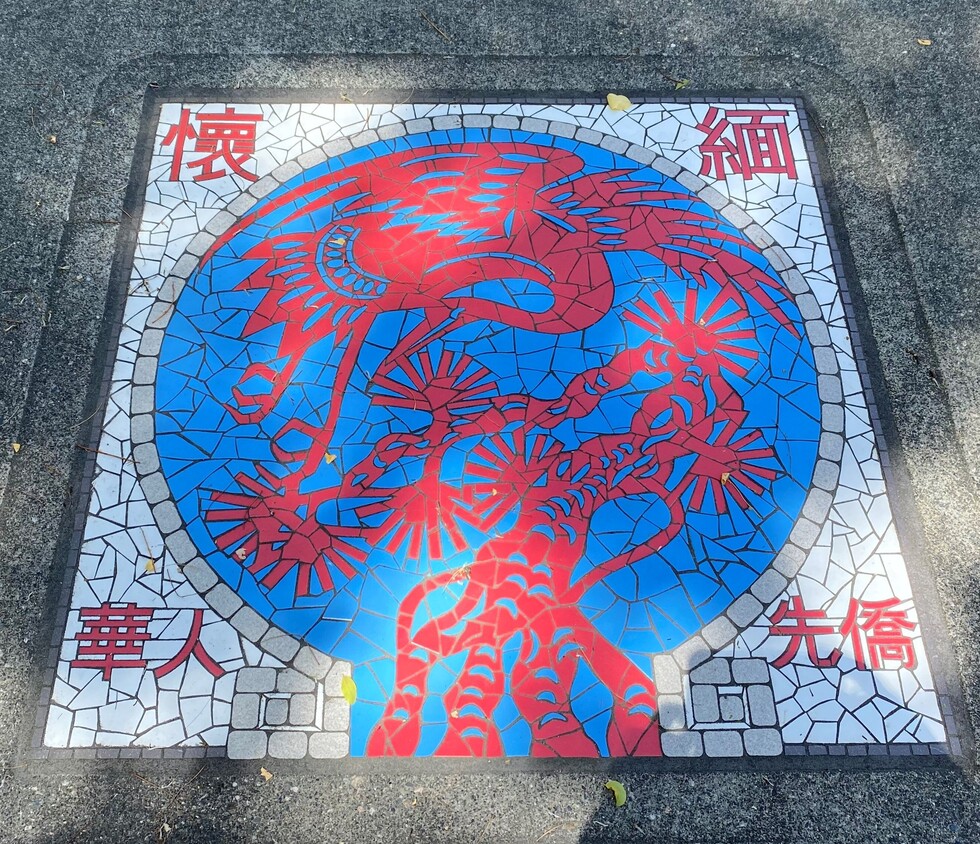 The Chinese Benevolent Association of Vancouver commissioned this mosaic tile to commemorate the early Chinese immigrants to Canada, and New Westminster in particular.

The mosaic depicts the ancient Chinese folk art of paper cutting which has a history of more than 1,500 years.  Chinese paper-cutting is one of the most treasured and representative handicrafts in China, and is recognized by UNESCO as an intangible cultural heritage.

The pattern is that of a crane on a pine tree, a traditional Chinese symbol of prosperity, health and longevity.  The pine tree is also known for its unyielding strength, proudly standing amidst the harsh winter snow.  This spirit of determination parallels those of the early Chinese immigrants who persevered and endured inequalities and other struggles throughout their settlement.

The six Chinese characters緬懷華人先僑in the mosaic mean: “Cherish the Memory of (Tribute to) the Overseas Chinese Pioneers”

The Society’s office was located at 826 Victoria Street, a building often referred to as the New Westminster Chinese Centre.  Their first meeting was held on March 16, 1915 to address concerns over New Westminster’s intention to use Chinese cemetery land for other city purposes.

Regular Society meetings continued until the early 1950s, and the last was held on March 24, 1969.  The property was subsequently gifted to the City of New Westminster in 1979.  The following year the building at 826 Victoria Street was demolished.

On September 20, 2010, the City of New Westminster became the first municipality in Canada to issue a formal apology to the Chinese community for past practices which contributed to discrimination and exclusion.

Designed and created by Liz Calvin, assisted by Dan Clark. Commissioned by the Chinese Benevolent Association of Vancouver, 2013.

More About the Artist: