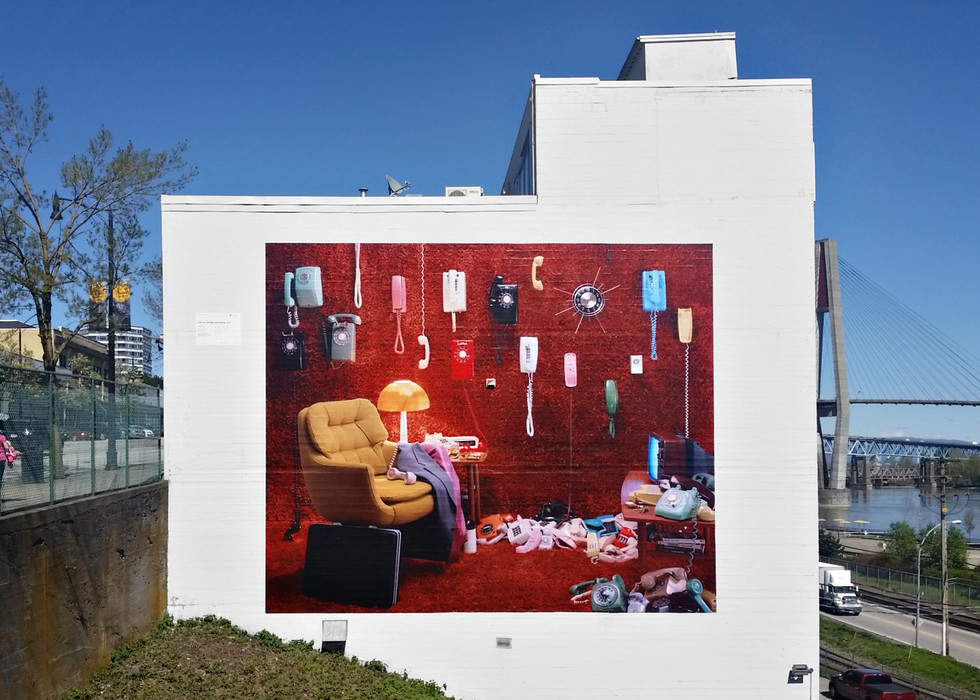 The Telephone Salesman presents the viewer with a surreal yet mundane tableau seemingly set in a dated living room. Entirely constructed in the studio from 1960–1970s furniture and objects, the work interrogates the viewer’s sense of the real as they are presented with an ambiguous, disorderly domestic space. Set in the early 1970s, The Telephone Salesman presents a melancholic scene in which a salesman has amassed a mysterious accumulation of rotary phones in his home. Drawing upon a range of references from the histories of photography and film, the image seduces the viewer with a cinematic, psychological portrait of an absent subject. This temporary public art installation was presented in partnership with Capture Photography Festival.

The artwork was installed at 350 Columbia Street, New Westminster.

Matthew Brooks is a Montréal-based artist originally from Winnipeg, Manitoba. He holds a B.F.A. in Photography from Concordia University and is currently an M.F.A. candidate in Studio Arts at Concordia University. He is the inaugural recipient of the Lande Award in Photography and holds a SSHRC Joseph-Armand Bombardier CGS Master's scholarship for 2017-18 as well as a FRQSC Master's Research Scholarship (B1) for 2018-19.

Aging architecture and material culture are frequent themes in his large-scale photographic work which explores ambiguous narratives and the veracity of the image. Within his hyperreal tableaus, the viewer’s sense of the real is destabilized, creating an uncanny sense of both reality and fiction. The construction of the photographic image is constantly at play in his works as he creates cinematic, anachronistic scenes which combine mundanity and artifice.

His work has been recently included in group exhibitions at Centre Skol, Galerie B-312, and Galerie POPOP. In April 2017, he presented a new large-scale public artwork in New Westminster, BC for the 2017 Capture Photography Festival which will be on display until March 2018. His work has also been published in publications such as Magenta Magazine, Lenscratch, It's Nice That, Huffington Post, FotoRoom, and Ain't Bad Magazine among others.

As an active research and production assistant, he has worked with artists such as Marisa Portolese, Adad Hannah, Tema Stauffer, Jeanie Riddle, Clara Gutsche, David K. Ross, Anne-Renée Hotte, Leisure (Meredith Carruthers and Susannah Wesley), and Jacques Bellavance among others. Work to which he has contributed has appeared in exhibitions at the Musée d'art contemporain de Montréal, Galerie Antoine Ertaskiran, Equinox Gallery, Pierre-François Ouellette art contemporain, Galerie Trois Points, and the FOFA Gallery among others.